There are no roads in Yaroslavl region - Elkhan Mardaliyev

Источник: The DairyNews
Deputy of the Yaroslavl Regional Duma, secretary of the regional Committee of Communist Party of the Russian Federation Elkhan Mardaliev confirmed that the activities of LLC Agrofirm Sit’, Agricultural production cooperative "1 May", LLC Agrofirm Latka and LLC Danilovo of Nekouz district suffer due to the lack of roads in the region, writes The DairyNews.

‘Of course, these are global issues! Yes, I received an appeal fr om employees, but not managers, of a number of enterprises specified in the deputy's request. Now the situation has moved from a critical point. Unfortunately, one of the farms can no longer be saved! If there are any more complaints about closed farms, I will inform you. Thank you for supporting the solution of this problem in Yaroslavl region! - said the deputy in response to a request from our agency.

According to him, the main reason for the current situation is the poor condition of the roads. As the deputy noted: ‘Their absence’. He added that this affects not only the work of enterprises, but also the life of towns and villages.

Elkhan Mardaliyev said that not enough funds are allocated for maintaining roads in a standard condition and repairing them - about 25-30% of the required minimum. Although, according to the deputy of the Yaroslavl Regional Duma, the volume of the "Road Fund of Yaroslavl region" is growing, and in 2021 it is more than 9 billion rubles.

We have received comments from residents of the region about the state of the roads.

‘We, the residents of the village Alferovo, Myshkin district, encountered a very bad road. More precisely, there is no such a road: only a small piece to the village, further - up to the knee in mud. However, there are a lot of students who need to go to school every day, there are small children and elderly people. All possible rescue services will not be able to enter the village, it happened already. All the residents really want the road to the last house in the village, let it be an embankment road,’ said a resident of Yaroslavl region.

‘Please pay attention to our problem, we do not have roads in Yaroslavl region. A large rural area: the village Pereseki and the village Chumzhino - it is simply impossible to enter the villages, we have written and complained for 5 years, and we just received formal replies. Neighboring villages are in the same situation. We wrote and complained - and everything is the same as before,’ said a resident of Yaroslavl region. 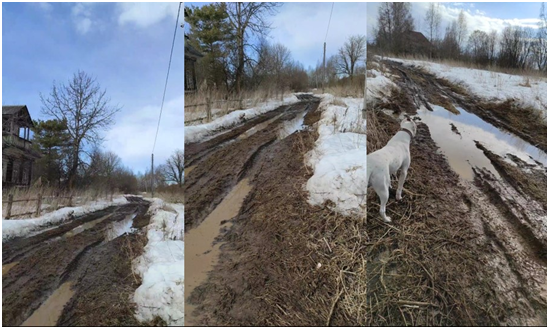 ‘I think it is necessary to go to the head of Agro-industrial complex of Nekouz district. We want to save the remaining farms! My birthplace is the village Mikishevo, near Spas-Ild, wh ere the farm is located. In this village, in 2015 or 2016, an embankment road was made from the cheese factory to the farm, so that milk could be taken out not only by tractors on the cabin in the mud. The road from Novy Nekouz to Spas-Ild is getting worse from year to year, Avtodor practically does not repair it, although there are even school routes along it. The same situation is with the roads on the route Nekouz-Rodionovo, Parfenevo. If the Agricultural production cooperative "May 1" in the village Mikishevo closes, then the working population will have nowhere to go. Everything will be broken and lost. The people who work there live with hope for the future! Almost no one has the opportunity to leave in search of a new job and life!’ said a resident of Yaroslavl region.

‘The Agricultural production cooperative Voskhod, of Nekouz district in the village Parfenevo, was in a difficult situation. Before that, there was a poor, but paved road. Last year, during logging, the road was completely killed by logging trucks, now there is asphalt mixed with soil,’ said a resident of Yaroslavl region.

‘The New Nekouz-Spas-Ild road is in a terrible state. Vehicles are falling into disrepair! Any vehicles! The car covers 15 km in 50 minutes. Local authorities have no funding!’ said a resident of Yaroslavl region.

‘There is a bad road in Nekouz district for 40 km. Every day there is a regular bus on it. During school period - a school bus with children. That year, a regular bus with people went into a ditch. Thank God, no one was seriously injured. 4 years no one cares about this road!’ a resident of Yaroslavl region.

‘Even large transport routes, on the scale of the district, are in the worst condition. For example, the routes Volga-Shestikhino-Novy Nekouz, Shestikhino-Borok-Breitovo, not to mention the route Novy Nekouz- Oktyabr. By the way, the villages Volga, Borok, Novy Nekouz, and Oktyabr are the centers of rural settlements. And the village Borok is also a scientific center of federal significance! Due to the closure of the hospital there, the flow of private cars along the Borok-Novy Nekouz road has significantly increased. The access to Shestikhino, as a railway station, is also essential. We often tear the wheels on the pits, and these are significant repair costs in comparison with salaries of rural residents. The flow of cars traveling from cities, in particular, Moscow, to Borok and Breitovo, significantly increases by the weekend, and these fishermen are a big source of income for local residents who rent out housing and take visiting fishermen to rivers and lakes,’ Eduard Garin, a resident of Yaroslavl region.

It’s worth noting that we sent a request not only to Deputy of the Yaroslavl Regional Duma Elkhan Mardaliev, but also to Governor Dmitry Mironov. In response, the regional Government forwarded letters from the Department of Agriculture and Consumer Market, as well as the Department of Road Management of  Yaroslavl region, which these departments had previously independently sent to us.

We have already reported that the Municipality is negotiating the delivery of milk from Yaroslavl farms to a new buyer.