Источник: The DairyNews
During his speech at the conference during the exhibition "Coffee Tea Cacao Russian Expo 2021", Director of the Dairy Intelligence Agency (DIA) Mikhail Mishchenko spoke about the coffee market in relation to milk, writes The DairyNews.
The expert noted that over the period 2018-2019, the number of coffee shops has increased significantly. The greatest dynamics are observed in Moscow and St. Petersburg. 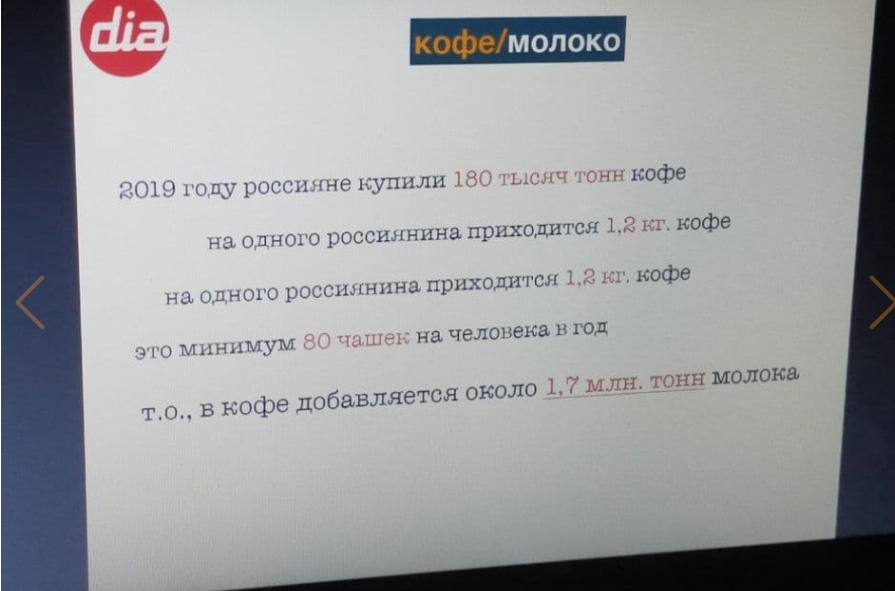 Mikhail Mishchenko noted that at least 80% of coffee is consumed with milk. The main coffee drinks with milk are latte, cappuccino, raf-coffee.

‘You need to understand that the dairy industry is quite conservative in terms of sales of dairy products. Therefore, as analysts, we always suggest looking for something new,’ Mikhail Mishchenko said.

According to the Dairy Intelligence Agency, in 2019, Russians bought 180 thousand tons of coffee. One Russian (including infants) consumes 1.2 kg of coffee per year.

‘If you calculate it roughly, about 1.5-1.7 million tons of milk are added to coffee in Russia per year. The total volume of production of drinking packaged milk in Russia according to the DIA estimate is 5.4 million tons (2019). Although in comparison with the countries of Europe and the United States, the amount of milk consumed by coffee industry is not big, it is supposed to increase,’ said the director of the Dairy Intelligence Agency.

The main consumption of coffee accounts for public catering establishments, where even during the pandemic it was possible to get a takeaway drink.

Mikhail Mishchenko noted that despite the fact that the consumption of drinking milk in Russia is declining, with the increase in other segments, including the coffee industry, the use of milk as an ingredient is increasing.
Популярные темы
АПКЖивотноводческий комплексСтатистика АПКСтроительство фермИнвестицииМолокоПлеменной скот