IFCN: out of the top 20 milk processors, Danone earns the most per kilogram

Источник: The DairyNews
According to analysts of the international network IFCN, in 2019, the highest rate of milk turnover was at the company Danone, writes The DairyNews.

We will remind that earlier IFCN presented the top 20 dairy companies in the world, which, according to the analytical network, account for 25% of all milk produced in the world and 42% of all milk received for processing.

Ten companies from the list are headquartered in Europe, six in North America, three in Asia (they show the most dynamic growth) and one in Oceania. 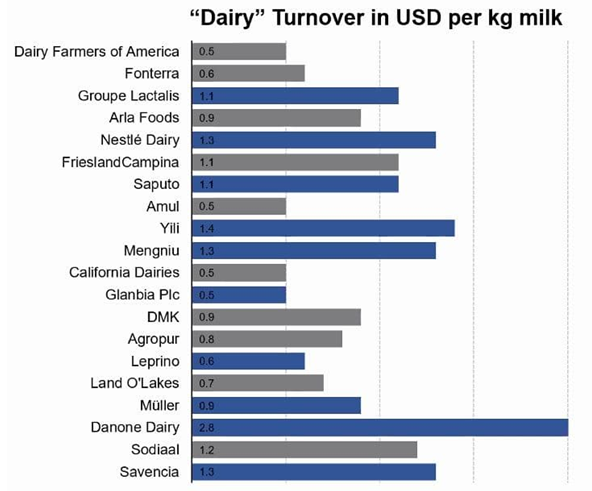 ‘If we compare companies from the TOP 20 in terms of "revenue" per 1 kg of milk, Danone is in the lead (2.8 dollars/kg), but for all companies, the "revenue" indicator is higher than the average price of milk according to IFCN calculations. Companies such as Danone, Nestle, and Lactalis have a higher revenue per kg of milk, as they produce mainly high-margin products. Private companies, in contrast to cooperatives, have a higher "income", as they are less bound by social obligations towards farmers who are owners of cooperatives,’ noted IFCN experts.