EkoNiva will expand the range of cheeses

Источник: The DairyNews
At the Prodexpo 2021 exhibition, the company held a product presentation with the opportunity to taste new cheeses. According to representatives of the company, only one of the varieties presented at the exhibition can be found in stores: the remaining four will go on sale later, writes The DairyNews.

Employees of EkoNiva, who held the tasting, said that organic products are represented by the variety "Medynsky Organic" — at the moment, its sale is carried out through the branded stores of the company. ‘The rest of the cheeses in retail are not available yet, at first they can be found at our outlets, and in the future, of course, we will actively work with retail chains,’ added the representatives of EkoNiva.

The organic farm is located in Kaluga region, the production of other types of cheeses is concentrated in Voronezh region. One of them belongs to the hard varieties, the planned aging will be from 3 to 6 months. 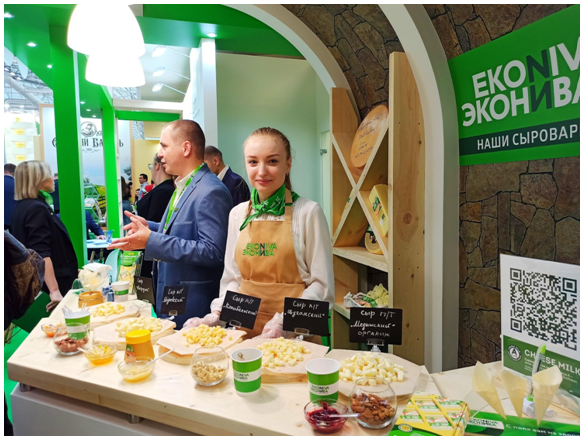 As noted by Karolina Vasilyeva, Head of the milk quality department for processing of EkoNiva-APK Holding, the company began to work on suitability of milk for cheese making long before the production of new products began. ‘We have our own milk, our own farms, we manage the whole process, so our goal was to match the milk to all possible parameters that are important in the production of cheese. Such a criterion as the ability to rennet, for example, is not enough to produce a good, high-quality product,’ said the expert of EkoNiva.

According to Karolina Vasilyeva, after studying domestic and foreign sources, consulting with the Research Institute of Butter and Cheese Making, and foreign colleagues, the company started its own research, as a result of which 29 quality parameters were determined — EkoNiva take them into consideration in the production of cheeses. ‘Of course, there are indicators that are familiar to everyone — for example, organoleptic - but there are parameters that we have been searching for a long time,’ the expert commented.

Preliminary work began about two years ago with the invitation of foreign experts to the farms. ‘We talked a lot with cheese producers, including those foreign colleagues who keep their own cows and small cheese factories. Of course, it was not always possible to apply the experience of small farms to our huge complexes, but we tried to collect as much information as possible,’ said Karolina Vasilyeva.

‘Four months before the launch of the plant was enough for us, in the end, to set up the work of the farms to meet all the parameters indicated by us,’ summed up the quality specialist. Such terms, according to the expert, became possible due to the cycle "from the field to the counter": ‘Many other producers simply receive raw materials and are forced to work with what is there. EkoNiva has the ability to manage this raw material.’

Karolina Vasilyeva told a little more about the quality criteria that EkoNiva has identified for itself: ‘We pay the most attention to the indicators of fat, protein and casein, which affect the yield of the product. It is also mandatory to conduct tests for total bacteria count and somatic cell count — these are general indicators of the quality of raw milk.’