Источник: The DairyNews
According to Dairy Intelligence Agency (DIA), in Russia, the production of commercial milk in 2020 amounted to 20.6 million tons, which is 5.5% more than a year earlier, writes The DairyNews.

We remind that Rosstat data used by official agricultural departments and industry unions report of 32.2 million tons of raw milk produced, according to Soyuzmoloko, the indicator of commercial milk production in 2020 was 23.5 million tons.

However, according to the government decree "On amendments to the State Program for the Development of Agriculture and regulation of markets for agricultural products, raw materials and food", the goal for milk production for 2021 is to receive 20.124 million tons, for 2022 - 20.245 million tons, for 2023 - 20.503 million tons. We are talking about an indicator without taking into account private farm holdings.

‘These figures are close to reality. Dairy Intelligence Agency (DIA) and The DairyNews have been trying for a long time to root in the minds of industry representatives and government agencies the simple idea that milk production in private farm holdings (with the exception of a few regions) is a myth that overestimates the real volume of raw milk production in the country and prevents real assessment of not only the dynamics of production, but also consumption of dairy products in Russia. It seems that we are close to the collapse of this "myth",’ commented the leading analyst of DIA Ekaterina Zakharova. 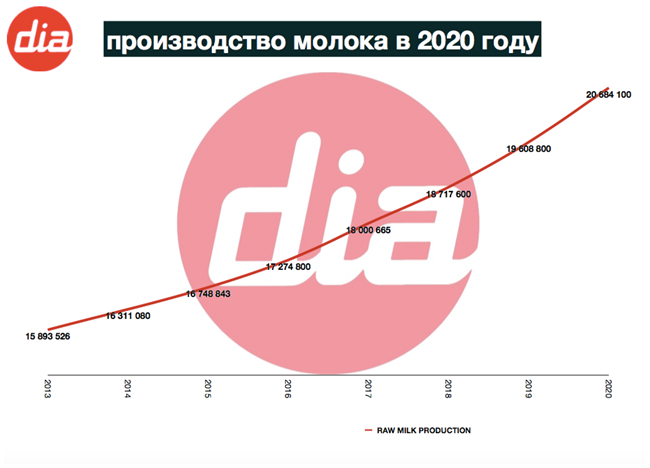